Foaling season is in full swing, and can sometimes be a very stressful time of year for both mares and owners!

So your pregnant mare is approaching her due date (on average 342 days after ovulation)… what can you expect?

Here’s a general timeline of how a healthy foaling should go.

If your mare will not be foaling at home, she should be moved to the site where she will be foaling so she can adjust to the new surroundings.  Depending on the situation this should be 2-4 weeks prior to the mare’s due date. During this time period, if a Caslick is in place it should be opened. The udder should be cleaned if dirty and monitored for size and secretions. Some changes that indicate foaling is approaching include udder development, laxity of the vulva and relaxation of the pelvic ligaments around her tail. These signs are particularly evident within the last 2 weeks of gestation. A change in the amount and character of secretions – waxing (dried colostrum on the teats) or dripping milk –often indicate that a mare is just days from foaling.

When a mare is approaching her foaling date it is best to disturb her as little as possible, especially during the night. Most mares will foal between the hours of 10pm and 2am, but parturition (aka birthing) can occur at any time of day. Watching them on cameras or from a distance to ensure they are not in labor and struggling is the least invasive way you can monitor them.

Parturition is a continuous process that is divided into 3 stages. The first stage usually lasts from 30 minutes to 4 hours, but can occur intermittently for days in mares who do not feel “ready” to foal. This is more common in mares who are often disturbed and do not have sufficient privacy. During stage 1, mares will show signs of colic such as sweating, rolling, flank watching and general agitation due to uterine contractions. In this time period, the foal should be rotating into the correct birthing position with the head and front legs facing the cervix. 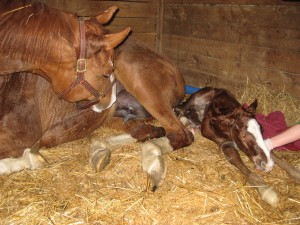 Stage 2 of parturition begins when the chorioallantois ruptures and allantoic fluid is expelled from the uterus – i.e. when her “water breaks.” The fetus is then passing into the birth canal and within 5 minutes of the mare’s water breaking the front feet of the fetus (covered with the amnion, a fetal membrane) should appear at the vulvar lips with the soles of the hooves facing downwards. Next, the nose should appear, followed by the chest and lastly the hind limbs, which should be extended backwards. In a normal foaling, the foal should be delivered within 20-30 minutes. If a mare appears to be having trouble delivering the foal within this time, or if the foal is not presenting itself in the normal position, it is important to call your veterinarian immediately. Sometimes foals will become stuck (resulting in a “dystocia”) and need assistance to be delivered.

Stage 3 of parturition begins when the foal has been delivered and ends when the fetal membranes (placenta) have been passed from the mare. The placenta will still be attached to the uterus when the mare rises from foaling, and should be tied to itself to prevent the mare from stepping on it. It is very important to allow the fetal membranes to pass on their own as pulling on them can result in a retained placental remnant or damage to the uterus. The placenta should be passed within 3 hours of foaling and when it is passed should be saved for the veterinarian to inspect. If the placenta has not been passed, or if an obvious piece is missing after passage, it is important to call your veterinarian immediately. Retained placentas should be treated as soon as possible to prevent major illness in your mare. 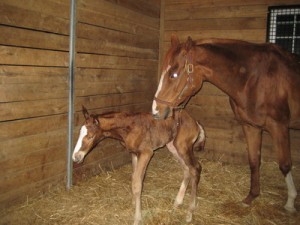 After a foal is born, the average time it takes to for it to stand is 1 hour. Nursing is usually observed within 2 hours after birth. During these first two hours of life, dipping the foal’s umbilicus with betadine or a chlorohexidine solution (antiseptic) will help prevent umbilical infection from occurring. We recommend dipping the umbilicus 4 times a day for 1-2 days after foaling. Deworming your mare with ivermectin within 24 hours of foaling will help prevent transmission of parasites through the mare’s milk.

Between 8 and 12 hours after foaling, a post-foaling examination by a veterinarian is an important step to keeping your mare and foal happy and healthy. A physical examination of your mare will help confirm that she has not endured any serious injury during foaling. Examination of the fetal membranes can determine if there were any abnormalities during gestation and confirm that there is not a retained piece of placenta.  A thorough physical examination of the foal will be performed and a blood test performed to insure that the foal has received sufficient protective antibodies from the mare’s first milk (colostrum).   If your foal has not received enough antibodies it may be susceptible to infections.  Supplemental colostrum or intravenous plasma can be administered by a veterinarian to provide a foal the antibodies it is lacking. 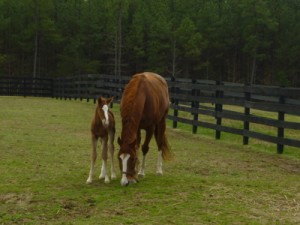 Having a foal can be an exciting but stressful event. It is important to be prepared and know what to expect in a normal foaling situation and when to call a veterinarian. If your mare is pregnant or you are planning to breed her, being ready for what will (or might) happen will leave you in the best situation possible. Just remember, if you have any questions or concerns about your foaling mare we are always just a phone call away!

Learn about our Reproduction and Foaling Services

Sign up for Our Newsletter
For Email Newsletters you can trust.

Sign up for our Newsletter
For email newsletters you can trust.